My Journey to the Championship

David Herbert is Head Coach of the SEABL Geelong Lady Supercats and a former NBL and WNBL Head Coach.

Firstly, I will provide a little background on myself and the journey which has led to my team’s recent success. I have never professed to be an outstanding coach but believe in working hard to achieve results. Could I have had more success along the way? Yes I could – but every result and every experience have resulted in becoming the coach I am today!

Am I a better coach now than I was when I was younger? Yes, probably, but I think it is more the range of experiences I have been fortunate to have that have culminated in my current approach, and I write this blog with this in mind.

As a 26 year old up-and-coming coach, I was told I had the makings of a great coach. I could communicate, picked things up quickly and wanted to coach at the highest level possible (and do this as quickly as I could). What I lacked was practical experience and the ability to manage people effectively. People management is the biggest area for a coach and especially for a young up-and-comer. To reflect back, I wasn’t ready to deal with many of the situations and individuals who were in some cases older than me. The lessons I learnt were invaluable life lessons and yes, given my time again I would approach a number of scenarios and situations differently.

These lessons have led me to tell young coaches who are trying to reach the top as quickly as possible:

Bide your time, make sure you are ready, put yourself in the best position to learn from the best coaches available, see how coaches manage situations, volunteer, and develop. Continually strive to learn and take the best part of every coach you have the chance to work with and create your philosophy.

Don’t let anyone tell you you’re not hard enough on players or you need to be more assertive. Learn to be you, learn what works in the delivery of your message and do not try to change and be someone else. At the end of the day if you try to change a personality trait, players will see through it and show less respect than when you started.

All my life I was told to be harder, yell more, show more discipline I have found other ways to manage this and gain results. You will find your way eventually, believe in yourself and it will work for you too.

In 2014 I decided to make the move from Cairns to Victoria, as my father and longtime Basketball stalwart Barry Herbert had become quite ill with the dreaded ‘C’ word. It was a tough decision leaving some wonderful friends and a career I was potentially going to retire in with Cairns Basketball. I still had a burning desire to coach, and around this time the SEABL position with the Lady Supercats in Geelong was advertised. The roster was solid enough, and with the rich history of the program and a love for Country Victoria I decided to consider this seriously. I actually knocked the position back three times as deep down my friendships in Cairns meant the world to me but the lure of being able to close enough to visit my father plus a great program saw me take a giant leap back to Victoria.

After what I consider a disastrous year with the Lady Supercats in 2016, I had a good hard look at myself and my coaching. I reflected on the fact that we had a team that should have won a championship. The roster was ten deep. This group however, was not selfless in approach. Put simply we did not have enough basketballs for everyone and the group did not want to play for me let alone each other.

2016 was increasingly frustrating with such a group of talented individuals. Everyone wanted to score which resulted in loads of forced and contested shots. As a coach, I personally reached a point that I questioned players and began stating, ‘I didn’t want them shooting the ball’. The negative message manifested and resulted in players going to the other extreme and not shooting the ball at all. Again, reflection of this simple area turned my philosophy on its head and I started to preach the following: ‘Every shot is a good shot, but could you find a better one?’

This had a dramatic effect on a young group. All of a sudden, every player had the freedom to shoot the ball and they were empowered too! This simple change gave the entire group ownership over what was a good and a bad shot. The result at video review time was awesome as we would discuss good shot selection compared to bad shot selection, contested versus uncontested shots. We now had freedom with accountability all by a simple change in philosophy that was given to the players.

The biggest change in what I have been doing personally as a coach was to simplify everything and to make my philosophy easy to understand and relevant to the next generation of athlete. It may surprise everyone but the Lady Supercats ran one offence, one end ball play, one side ball play, one zone offence and for a majority of the season played man to man defence with only minimal changes. During the finals, we used zone defence to throw teams out of rhythm. We had been practicing our zone defence at training for months and waited for opportune moments to change-up which proved effective, helping us defeat a strong Kilsyth in the East Conference final and Bendigo in the All-Conference final. 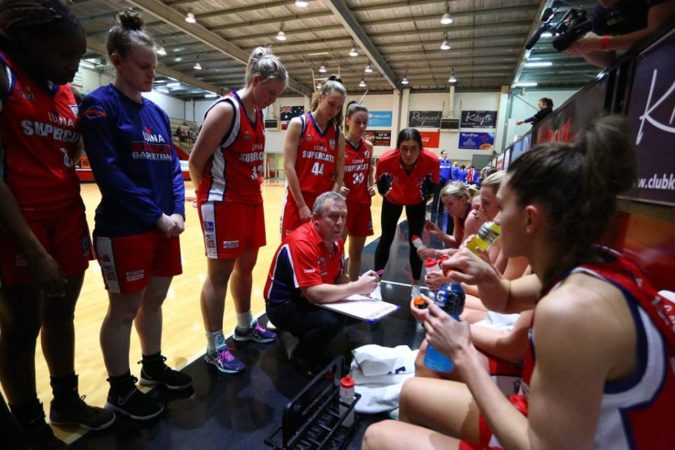 A conscious decision was made in 2017 to run one offence and stick to the process involved of teaching this offence. As a coach, I would go through a season and change offences and defences multiple times (sometimes weekly) based on a poor performance or a new idea that may have come to me. The teams I coached lacked consistency, and reflecting on many previous seasons it was decided that no matter what happened – how poorly we might play – a clear focus on developing players to execute the system better each and every day was going to be provided.

We would run offensive breakdowns over and over again and the same drills would be used with slight variations on a way a certain team may defend us. Coming from a coach who would always spend up to 45 minutes drilling defence, to me the offensive focus was a massive change. The result was that our offence kept improving to the point our defence improved two-fold. This philosophy change proved successful with our overall scoring across the season improving to 78 points per game while keeping teams to just 61 points per game at the defensive end.

Another area simplified was our scouting. Previously I would go into great depth about an opposition’s plays and how to defend each aspect of the play. This was time-consuming and potentially left the group more confused than anything. Another conscious decision was made: to simplify the process and focus more on individual players and the tendencies they displayed to shut a team down. We focused on individual weaknesses and attempted to exploit these rather than become bogged down on ‘switching this’ or ‘hard-showing that’ and the result was our ability to shut down individuals within their system. We were able to keep some of the league’s best players well below their season averages.

Overall, our season was one of success as we played without our marquee athletes for a majority of the season. The likes of Sara Blicavs, Alex Bunton, Alex Duck and the early departure of Chantel Horvat meant we never had a consistent line up throughout. What was consistent though was the process of how we played and how we went about preparing for opposition teams. The focus on keeping everything simplified.

In finishing, a big thank you to my support network – the Geelong Supercats and my partner Rachelle who helped me find and rekindle my passion for coaching again. I made a promise to my late father to win a championship and feel pleased that this could be achieved.

Now, to start to focus on the process again…