Dual Olympian Jenni Screen and Bendigo Spirit coach Tracy York will join an impressive list of presenters at the 2019 Basketball Australia Coaches Conference to be held in Ballarat October 2 and 3.

An Olympian in 2008 and 2012, Jenni Screen was also a member of the Australian Opals World Championship gold medal team in 2006. Renowned as an elite defender and leader, Screen played 178 games in the WNBL, as well as playing professionally in Italy.

Currently a member of the FIBA Players’ Commission, Screen has moved into coaching in recent times, taking on the role of High Performance Coach (Metropolitan Women) with Basketball Victoria.

The former Opals star will present on ways coaches can assist young athletes combine their basketball with academics and their holistic development.

Tracy York was appointed as the head coach of the Bendigo Spirit earlier this year and brings a wealth of experience to the role, including working as an assistant coach with the Adelaide 36’ers for the last three years.

The experienced mentor is also the Australian Under 17 Women’s team head coach and was an assistant coach when the young Sapphires claimed a gold medal at the FIBA Under 17 World Championships in Spain in 2016.

She will present on skill and concept development for young athletes, focusing on her experience in guiding young Australian teams to FIBA Oceania gold medals in the last two years.

The early bird registration for the BA Coaches Conference is now available, with news about additions to the already impressive panel of presenters to come soon. Join coaches from all over Australia in learning, sharing ideas and simply talking hoops at this year’s conference.

Respected international coach developer Chris Oliver was the keynote presenter at the 2020 Tasman Coaches Clinic in Albury, with more than 150 coaches taking the opportunity to observe a wide variety of decision making drills and concepts. Below are some observations from the 19th Tasman Clinic

Prompts in the gym –

Important to “eliminate the fluff”

Use of questioning – be OK with the silence before the athletes answer. Too many coaches answer their own question

“Constraints are things that frame learning”

On the creation of advantage – “can we leverage the advantage?”

Make the athletes “perceptually aware of the opportunities and decisions”

“Me first for us” – Doug Novak on being a scorer first

Game is played on a “two count”

Pivoting – create space or an open window to create

Shell concepts – 3 team “switch” element to shell, where offence is out, defence to offence and new team in on defence – promotes communication

Game repetitions in practice adds to your game coaching

A former WNBA Coach of the Year and coach of the 2018 FIBA World Championship silver medal Opals, Sandy shared some key strategies that coaches at all levels can apply to improving at the defensive end of the floor.

Thanks to Coach Brondello and Basketball ACT for their assistance in providing this valuable coach development clinic. Below is the link to the video of the clinic, with thanks to Ben Merchant for pulling this all together.

Steve Teakel is the Head of Community Basketball with Basketball Australia. He has extensive experience in coach development and education across multiple sports and has devised programs for youth coaches. Steve shares with us some ideas on ensuring sport remains fun for children and players of all ages.

Why do you choose to play sport? ……..because it is fun! This has consistently been the number one response to surveys on why children participate in junior and youth sport.

So, what does fun mean in a sporting context – from a players, parents and coaches view?

Some research asked players (75% participated in more than one sport), coaches and parents to identify all the things that make playing sports fun – the final list revealed 81 determinants of fun. 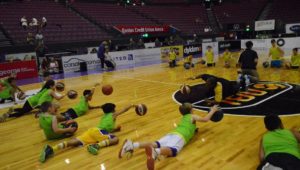 It was interesting that winning was in the lower end of the determinants of fun.

These were then sorted into groups by the players, coaches and parents – creating 11 sub – groups with specific and actionable behaviours that promote and foster fun.

Of these 11 sub-groups the fun determinant that was rated most highly:

In order to make participating in basketball more appealing to all there are a number of practical implications for coaches, clubs and parentsto consider from the research:

What is our responsibility as parents, coaches, club committees?

We need to continually ask our players the question – are you enjoying yourself out there?

It has to be fun – and if it is not fun then we need to act and find a way to make it fun. No doubt the players will come up with a range of ways!