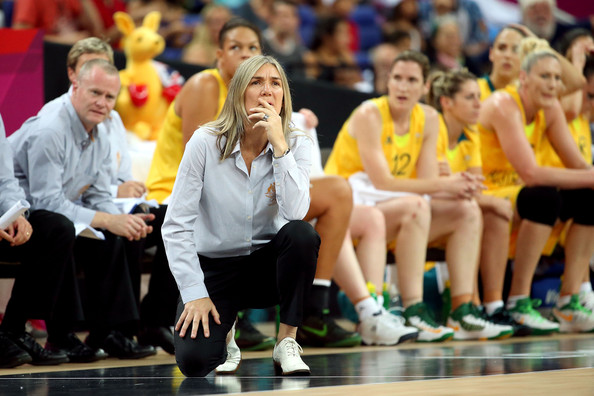 Leaders from the fields of playing, coaching, officiating and mentoring will present in a special panel discussion as part of the 2018 Basketball Australia Coaches Conference to be held at the Australian Institute of Sport May 7 and 8.

Former Opals Olympic and World Championship mentor Carrie Graf headlines a panel that will discuss “Leadership and Mentoring for Female Coaches” as part of the conference, which will attract coaches from throughout Australia.

A WNBL life member and multiple championship winner, Graf is an icon of the sport in Australia, having coached in the WNBA and been at the helm of the senior national team for the 2010 and 2012 Olympic games.

She will be joined on the panel by former WNBL player and now WNBL referee Michelle Cosier, who has successfully made the transition from elite player to elite official in recent years.  A WNBL champion and national junior team player as an athlete, Cosier is now officiating in the WNBL and elite junior pathway.

Leading coaching leadership consultant Liz Hanson will also be part of the panel.

For over a decade, Hanson has been the Client Director at Athlete Assessments, an international consulting company specializing in the ‘people side of sport’. Clients include some of the top US College athletics programs, professional and Olympic teams and Australian national sporting bodies.

For over eight years, Liz has been a faculty member of the National Collegiate Athletics Association (NCAA) Women Coaches Academy in the United States, teaching three programs per year.

Rounding out the panel is WNBL life member and championship winner Gail Henderson.

Henderson was a stand-out player with, before moving into a successful coaching career at the elite junior and school level in Sydney. She has also had two daughters progress through the junior pathway to the US collegiate system and brings a wealth of experience at all levels of the sport.

The panel discussion will be held in the Ric Charlesworth Theaterette at the AIS and will be a key element of the Coaches Conference, which includes on-court presentations from leading coaches and a keynote from FIBA’s World Association of Basketball Coaches Patrick Hunt. Registrations are still being taken for the conference.

Register for the Conference here.

SAVE THE DATE FOR 2019 COACHES CONFERENCE IN BALLARAT

Basketball Ballarat will be the host for the fourth annual Basketball Australia Coaches Conference when it is held on October 4 and 5 this year.

The annual Coaches Conference provides coaches from all around Australia with the opportunity to learn from leading presenters, share ideas with colleagues and gain exposure to some of the best practice techniques and methods of the global game.

In what will be a huge week of basketball for the city, Ballarat will also play host to the Australian Under 14 Club Championships which runs from September 30 – October 5.

“For regional Victoria to have such a high quality educational and development experience come to the area will help provide a terrific learning and networking opportunity for regional coaches as well as those from across Australia.

Respected international shooting coach Dave Love has been secured as one of the keynote presenters for this year’s conference and more high level presenters will be announced soon.

Love has worked in the NBA with the Phoenix Suns, Cleveland Cavaliers and Orlando Magic and, since 2001, has helped develop the shooting skills of young basketball players with his ‘The Love of the Game’ program.

“In addition to having such a high-profile international coach in David attending, Basketball Ballarat looks forward to hosting Peter Lonergan, Basketball Australia’s Director of High Performance Coaching and Talent Identification, who is internationally recognised for the quality of his coach education work,” said Eddy.

Early bird registrations for the 2019 Basketball Australia Coaches Conference will open July 1 so coaches should save the date for what will be a massive two days of coaching, learning and development.

With over 100 delegates from across Australia and abroad preparing to meet for the 2018 BA Coaches Conference, we are pleased to release the final conference schedule.

We are privileged to have respected United State collegiate coach Kerry Rupp present two on-court presentations during the conference, along with our Basketball Australia Centre of Excellence coaches Kristen Veal and Adam Caporn and NBA Global Academy coach Robbie McKinlay.

Away from the floor, we are focusing on the coach as a leader. We are again fortunate to have Patrick Hunt – President of  FIBA’s World Association of Basketball Coaches – present on leadership, along with respected Indigenous community leader and former elite player Timmy Duggan present a keynote. In recent weeks, we have added a panel featuring leading contributors from the WNBL to discuss leadership and mentoring in the sport.

The final conference schedule is displayed below and can be downloaded here. 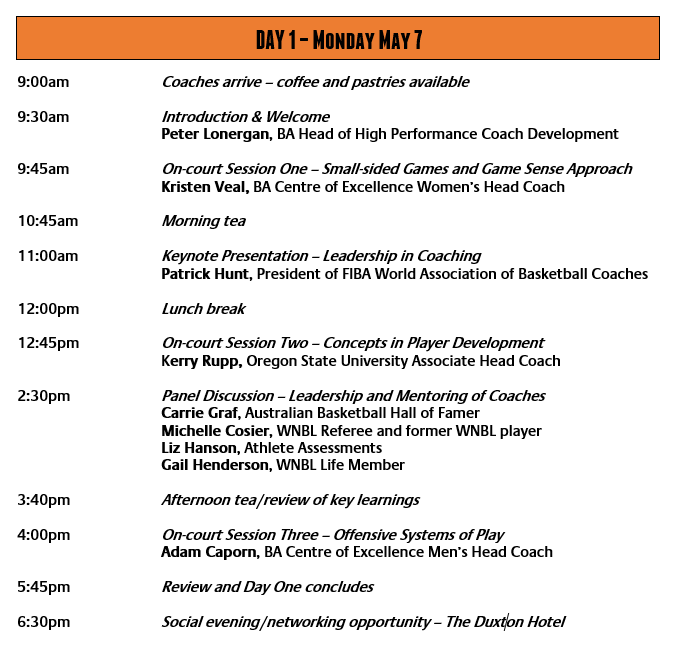 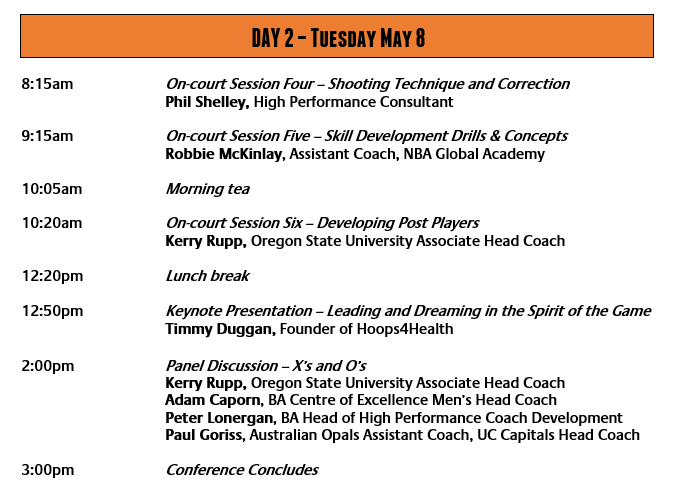 One of Australian basketball’s indigenous basketball pioneers, Timmy Duggan, will be a keynote presenter at the 2018 Basketball Australia Coaches Conference to be held May 7 and 8 at the Australian Institute of Sport.

The first indigenous player from the Northern Territory to play in the National Basketball League, Duggan played with the Gold Coast Rollers and Cairns Taipans before carving out a successful career in both the SEABL and QBL.

A leading advocate for indigenous health and welfare, Duggan is the founder of the Hoops4Health program. Throughout the last two decades, has worked tirelessly to use basketball as a vehicle to inspire indigenous youth and impact the community.

A former Basketball Northern Territory Director of Coaching, Duggan has worked extensively with junior players in Darwin and surrounds and continues to play a key role in mentoring young indigenous athletes from around the country.

He will present a keynote entitled “Leading and Dreaming in the Spirit of the Game”, focusing on engaging and developing indigenous athletes and coaches.

Basketball Australia Head of High Performance Coach Development Peter Lonergan said the addition of Duggan to the list of presenters at the conference provided an important opportunity.

“Timmy is respected nationally for his ongoing commitment to the community and his work in promoting healthy, positive lifestyle choices through basketball,” Lonergan said.

“As a player, Timmy had the ability to make others better with his point guard play and he has brought those skills into his coaching and leadership work post career. We are excited to have him join Kerry Rupp and Patrick Hunt as our keynote presenters for the Conference.”