Basketball is a game of language, acronyms and jargon. Coaches adopt many different words and phrases to teach and paint a picture with words to achieve improvement and performance.

But when does this jargon become simply “white noise” and how can we ensure the players are absorbing the information? Here are some thoughts on effective communication and use of language.

Painting a picture with your words –

With any language, teaching cues or coaching terminology, it is important to create a mental picture of the desired outcome. Your language needs to be descriptive and cue behaviours and actions.

For example, many coaches will use the term “blitz” to describe the double team of the ball screen. Why? It creates an image of aggression and pro-activity for the players. Far more than a number or colour being called.

The more your teaching cue or play call can create action and spark a mental image of the movement required, the more efficient your communication will be.

Young players tend to be quote literal learners. They will respond to what they believe the teaching cue means.

Similarly, your language and jargon needs to fit with the age group and experience of your team. Players are not “mini-coaches”, you need to provide verbal cues they understand and not just for the benefit of your coaching staff and others watching.

Often, players will not tell the coach they don’t really understand a term, phrase or piece of jargon. Rather, they will nod and smile as they desperately try to figure it out on the fly. Coaching and teaching is about the players, they are the ones that need to understand and absorb the information.

The power of the dot point –

One of the key strengths Coach Eastman has in presenting information, be it on court, in a clinic or talking to business groups is the use of dot points to frame his message.

Coach has developed a series of dot points on a wide range of topics and this allows him to succinct in his communication and get to the heart of what he is looking to communicate.

This concept of “teaching in dot points” can be very effective in the coaching space and is linked to the concept of “the power of three” we touched on in a previous article.

Incorporating your language across the program –

Most teams and programs have common language cues they have adopted for on-floor communication. Be it technical or tactical cues, coaches work with their assistants and players to implement and refine their communication system.

How do you achieve this common ground for team/program language? 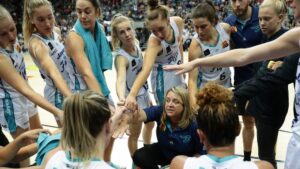 Seek buy-in at all times –

In establishing your language and communication, start with the end in mind. Simply, start the process with a view to capture the buy-in of the most important people – the players.

For the language to be “natural” and organic, the players need to believe in the system and its value. As with any part of coaching, don’t under-estimate the value of investing in seeking buy-in. How do achieve buy-in?

Language in the play-calling –

In the WNBL and NBL, teams have dozens of sets, after time-out and situational plays that all have specific names. So how do the platers (and coaches) remember which is which in the pressure of the game?

The most effective communicators on the side-line and in time-outs have language around specific actions or concepts and simply layer this into the play call. For example, if a wide down screen is described as “wide” in the language and a middle ball screen is a “hit”, a play call involving those two actions might be “wide, hit”.

If you want to involve a specific player, simply layer that to “wide, hit, 24”, which would be a wide down screen, into a pick and roll between the two guard and the four-man. That way the language links to a series of common actions and allows for simple decision making for the players on the floor.