Developing the Screener in the Pick & Roll Game

The ball screen is such a significant part of modern offensive basketball and is an area that coaches need to understand and provide young players with the skills and concepts to succeed in the pick and roll setting. One of the most challenging areas for young players in this setting is the role and skill set for the screener.

At the youth level, the pick and roll is often about the handler or primary playmaker and the majority of time is invested by coaches in developing the ability of the handler to execute skill, read the defensive coverage and make plays. This is obviously extremely important, but so is teaching and expanding the knowledge and skill base of the screener and provide them with the tolls to succeed.

Start at the beginning –

To be a successful as the screener in the pick and roll setting, players need to have a solid fundamental and movement pattern base. This includes –

Developing the above skill package is vital in assisting young players in the ball screen environment. Balance, footwork and basketball-specific agility are crucial for players at all levels and this can only be developed through repetition, detailed instruction and video review.

This Basketball Tasmania clinic from Hobart conducted by BA Centre of Excellence Men’s Assistant Coach Michael Cassidy covers some drills and concepts to assist with the skills for both the handler and screener in the pick and roll.

Providing players with the tools to make the appropriate decision is a key element of coaching. Once the player is in the speed of the game, they are the ones who must see the play unfold and make the appropriate read and decision. The role of the coach is to provide these tools through detailed instruction, repetition/rehearsal and practice through small-sided games and live settings.

What is the coverage? –

Once they know and understand the coverage –

Other key questions he uses in developing young bigs are – 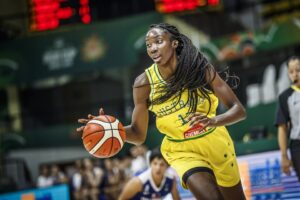 The ability of the “roller” to make a secondary play on receiving the pass is another important skill and concept area that coaches need to invest in with young bigs. The leading pick and roll players in the international game all have heightened abilities to see the helping defence and coverage and make the appropriate play.

Exposing players to a host of scenarios and situations is valuable in developing the ability to make the next read, including –

These are just some of the elements the developing big needs to be exposed to as they expand their skill and concept awareness in the pick and roll setting.

The goal of all coaches is to provide their players with the skills and understanding to thrive in any setting and situation on the floor. Providing a strong understanding and skill package for the screener, regardless of their size or position, is an exciting and enjoyable task for coaches of all levels.